Investigating the Mechanisms Underlying Synaptic and Cognitive Deficits in Alpha-Synucleinopathies

Resident in the Department of Medicine, University of Pittsburgh

Parkinson’s disease (PD), the second most common neurodegenerative disease, is characterized by intracellular inclusions called Lewy bodies, and loss of selective brain regions at the neuronal level, resulting in overt motor abnormalities at the clinical level. However, the neuropathology observed in PD extends beyond these selective regions implicated as the source these motor deficits, and thus a majority of PD patients develop other symptoms such as dementia. To that end, understanding the mechanism by which α-synulcein, a major component of Lewy bodies and protein mutated in genetic versions of PD, contributes to cognitive deficits will enhance our knowledge of the disease process and identify new targets for therapeutic intervention.

Why Did You Choose MN?

The MD/PhD program at the U of MN is strong. There are many good clinical opportunities and medical and graduate training. During the interview process, students seemed happy and cohesive, and the faculty seemed involved and invested. 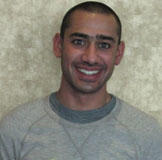